Only poets can express and evoke the sweetest, most intoxicating dreams
By Maurizio Rebuzzini (*)

There was nothing to see in the land in the way of a fower. There were just dry, white bones. So I picked them up.”- Georgia O’Keeffe

At least one foreword is absolutely essential whenever we tackle the subject of photography, as we are about to do now to introduce and appraise the compelling and exciting project by the talented Alberto Bregani.

Although people (who are not professional photographers) are convinced that real life photography is closely linked with reality… nothing could be further from this belief, and not much could be closer. In fact, photography differs considerably and fundamentally from any other form of communication and expression (not only visual); yes, photography is bound by and to the presence of a physical subject (be it natural or manmade), but between the indispensable portrayal and the voluntary, mindful representation is an artist whose actions are guided and steered by his or her experiences, beliefs and intentions, as well as his or her obvious preconceptions. And why not?

Therefore before we actually meet Alberto Bregani’s photographs of the mountains, which give us great food for thought and cause to refect further on greater issues and values, other corresponding opinions offer reassurance and emphasis. In the words of Hubertus von Amelunxen (professor of Media Philosophy and Cultural Studies at the European Graduate School in Saas-Fee, Switzerland), «Whether photography creates the effect of reality primarily depends on whether it strictly adheres to what is being represented; its content can be manipulated or highlighted without invalidating its supposed documentary truthfulness which is based on the technology used. » (The Century’s Memorial. Photography and the Recording of History; 1998).

And then with regard to the use of optical instruments (presumptuously and speciously viewed as “objective”), in the words of Lucia Moholy, «Every art has its technique. So has photography. But the relation between photography and its technique is a peculiar one: there is more equality of rights between the two than there is between the other arts and their techniques. Hence the widespread conclusion that photography is not an art at all. » (in One Hundred Years of Photography: 1839-1939).

To all intents and purposes this is true. The practice of photography also depends on the skilful use and employment of its basic instruments. The artist-photographer needs to know how to control and guide them so he can direct his expressiveness and creativity to refect his intentions: this is the syntax of a language that presupposes its own infections and revelations just like any other language does. Like the punctuation, timing, evocation and recognition of writings and words. So again, photography is depictive by nature, yet representative and interpretative by desire (and skill). In this particular instance Alberto Bregani’s photographs of the mountains, in the mountains, are depictive by irremissible necessity, yet representative and interpretative by irrefutable intentions (and skill). The expressly declared subject invites you to consider other things, which are still in a hypothetical form.

This is the syntax of a language that presupposes its own infections and revelations just like any other language does.

The work of mountain photographers, such as Alberto Bregani’s, is often conditioned by forces limiting it to the world of people who work with and adore the mountains, when really it should be included in the realm of pure photography with all its captivating expressiveness. So after a few examples in the nineteenth century, mountain photography is mostly excluded from every account and historical narrative, and constantly limited solely to stories and not much else (fragments of fashion, something intentionally artistic and nothing more).

After the great feats of the Italian Vittorio Sella (1859-1943) and the French brothers Louis-Auguste and Auguste-Rosalie Bisson (1814-1876 and 1826-1900), there was darkness, oblivion. And yet to be done well and fttingly mountain photography demands so much sacrifce, so much discipline and an equal amount of ethics that an extraordinary line is soon drawn in the sand: only beautiful, effective mountain photography exists and transpires. Unsightly mountain photography cannot exist, nor transpire, as its creation is selective (unlike all other lifelike and real photography, which nowadays is above all defned, conditioned and patronised by useless “beautiful” photographs).

The photographs of mountains – and I hasten to immediately add fantastic photographs of mountains – taken by Alberto Bregani are not limited to observations from a distance, as many by other even exalted photographers do, who stay at arm’s length. Alberto Bregani hikes to his subjects to take their photographs; he climbs the mountains, walks the trails, and goes to places most people never see (which are well hidden because such immense physical sacrifces are required to reach them), breathing the air at altitude, and synchronising the beat of his heart with that of the mountain.

So with this as his modus operandi, and guided by that exceptional unique talent that enables him to sense the right times to fnd the best and most suitable light (photography is light), Alberto Bregani applies and interprets two fundamental conditions of photography, both of which he fully understands and believes in. One: (in the words of Edward Steichen, a photographer in New York at the beginning of the twentieth century) «The mission of photography is to explain man to man, and each man to himself». Two: (diverging from the common conception that distances photography from painting) he knows how much and how photography is above all illusion. From which, one of the main debts of gratitude of photographic expressiveness depends on theatre, mise en scène, and how it is expressed.

Each one of us opens the doors to a lovingly represented world when looking at Alberto Bregani’s photographs of the mountains (in the mountains). When looking at the original prints in the pages of this compelling monograph (which also introduces the possibility of an individual visual rhythm), or on the monitor of a computer… a form of visual theatricality comes to life that blots out your surroundings so only the pictures exist. The steps taken by Alberto Bregani become ours in a suggestive temporal sequence, from the subject to its artful portrayal, from real life to its image. No matter how much they are fxed in a place we fnd comfortable, when roused and enticed by a photographic interpretation nothing short of superlative, our heart guides the mind towards faraway horizons, unknown spaces, and soul-stirring settings. It’s absolutely true, and needs repeating: when done well, as in the case of Alberto Bregani, «photography explains man to man, and each man to himself».

It’s absolutely true, and needs repeating: when done well, as in the case of Alberto Bregani, «photography explains man to man, and each man to himself».

Alberto’s photography is created with such great love for the subject (the mountains), for the medium (photography), and for the intended observer (all of us) that it is really worth the proverbial thousand words. Even though, if we are honest, there are just as many words that cannot be reached through photography. And yet there are still photographs, like these by Alberto Bregani, that evoke heartfelt words, and even explain them, (in the words of Giacomo Leopardi) «The soul imagines that which it cannot see». And so to L’infnito (The Infnite), «Always dear to me was this solitary hill, and this hedge, which, for its part, excludes most of the horizon. […] And in traversing this immensity, my thoughts drown, and to me, to shipwreck in this sea, is sweet. Independently of desire for pleasure, an imaginative faculty exists in man that can conceive things which are not, and which can imagine real things in an unreal way. Considering the innate tendency of man toward pleasure, it is natural that one of the principle functions of the imaginative faculty is to imagine pleasure.

At this point I must include a technical note about Alberto Bregani’s interpretative construction for the beneft of photographers, who are aware of his stylistic methods, and also for the wider public, who need to be informed. After having emphasised the high formal quality of his black-and-white prints, which make up the traits of an exceptionally effective and expressive language, let’s focus on square compositions. But not before also having revealed that photography is nevertheless an extraordinary combination of logical rules and arbitrary practices, which Alberto Bregani applies with particular diligence.

The square composition is not a trick, it means vocabulary and syntax. Primarily the square composition is uncomplicated, which is not a problem (even though some may view it as such), and leads the observer’s gaze, preventing it from wandering from left to right or up and down, without fnding a focal point, and calls for absolute, binding concentration.
However, this is not a trick, like one of those an illusionist might use to misdirect the audience’s attention. Quite the opposite; it is a clever infexion, which achieves meaningful mutual understanding with the observer through the deferential interpretation of the subject. The gaze rests lightly on photographic visions that immediately touch the heart: it’s illusion, theatre… it’s real photography. And so to conclude. Before anything else, photography is first of all an act of love. Its alienating allure alludes to words never spoken, the happiness of life, and to the dream held by each one of us in our heart.

Before anything else, photography is first of all an act of love. Its alienating allure alludes to words never spoken, the happiness of life, and to the dream held by each one of us in our heart.

But there’s more. When photography is interpreted to reveal, or rather «explain man to man», like Alberto Bregani’s mountains do, it becomes poetry. And only poets, like Alberto Bregani, can express and evoke the sweetest, most intoxicating dreams. And fnally. Take a close look at these photographs (poems). It doesn’t matter whether or not we focus on the subject-pretext; whenever we look at these photographs they refect and inspire everything that we fnd within ourselves. This is the mission of photography.
Maurizio Rebuzzini 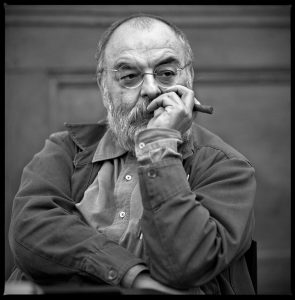 *  Maurizio Rebuzzini  – Professor of the History of Photography at the Faculty of Humanities at the Brescia campus of the Università Cattolica del Sacro Cuore | Editor and director of FOTOgraphia Maurizio Rebuzzini has worked in the field of photography, and written about the language, techniques and customs of photography since 1972. He is one of the most important and esteemed photography italian critics and historians. (www.mauriziorebuzzini.it ) | Photo © Marco Cavina